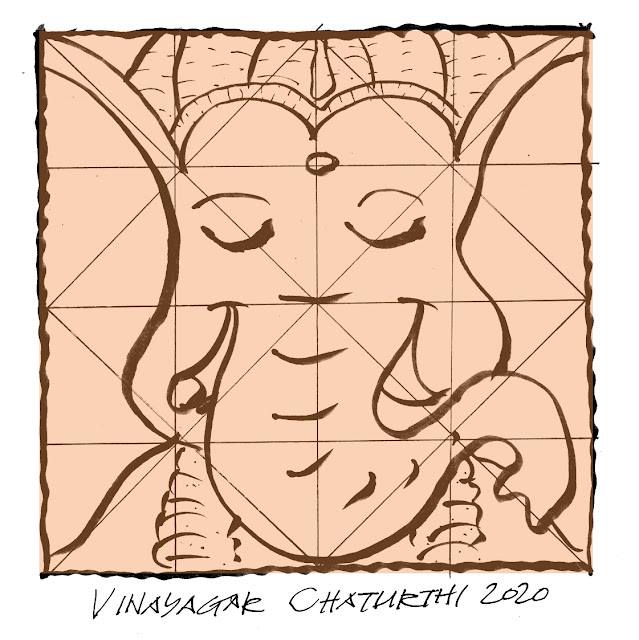 Today is Vinayagar Chathurthi falling this year on 22 August 2020 in the Tamil month of Aavani. Vinayagar's birthday- a big celebration in North India.

The 4th day after the new moon. 4 denotes chathuram. So I decided to draw Vinayagar centered in a square which is a four sided polygon.

Posted by Senthilkumaran at 17:45 No comments: 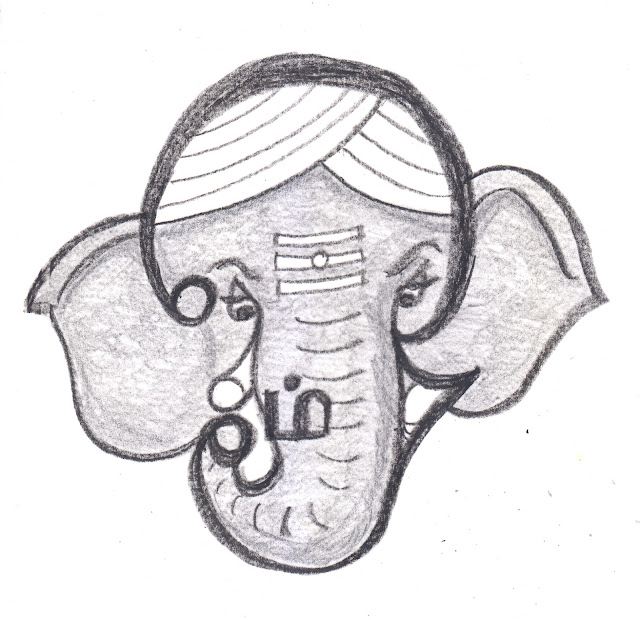 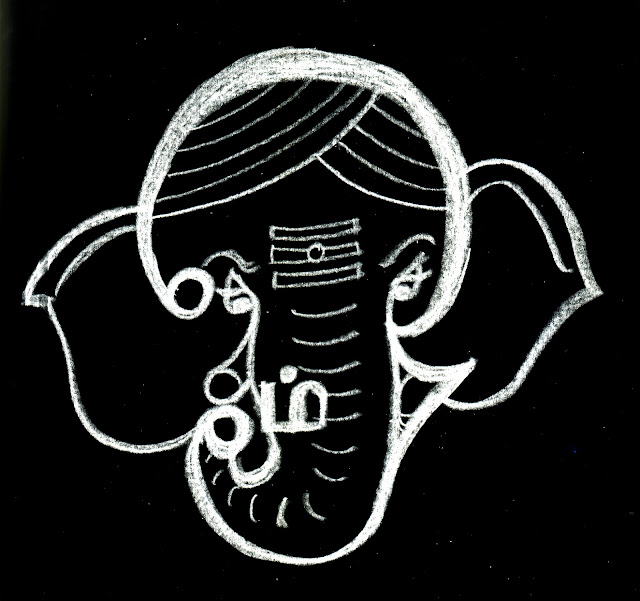 The primary sound Om (AUM) can be made by any human being whether they have the power of speech or not. It is made by the vocal chords and the mouth starting in the wide open position (Aaa), narrowing (Ooo) and closing the lips (Mmmm).
Hindus associate this sound with the deity Ganesh/Ganapathy/Vigneswaran/Pillaiyar.
There are many representations of Ganesh written with the Sanskrit script Om symbol, but there seem to be very few with the Tamil language script Om.
This is a study I have made with Ganesh represented with the Tamil script for Om.

Posted by Senthilkumaran at 20:59 No comments:

The Elephant God... a pencil study 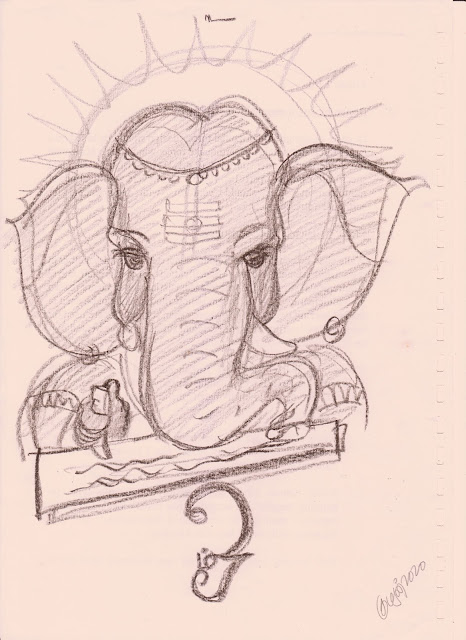 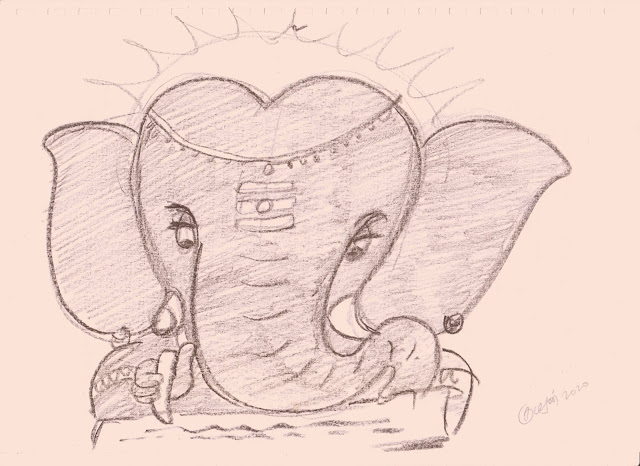 Ganesh, Ganapathy, Vigneswaren, Pillaiyar... many names for this deity from the Hindu pantheon. Yet images/statues have been found as far afield as China.
In Tamil literature and devotional poems he is described either as "he with the elephant face" or as being "with the head of an elephant". These studies are inspired by the latter.
I had sketched two versions focusing on the elephant aspects.
Black Saintograph China Marker on white paper as you can see from the photo below. 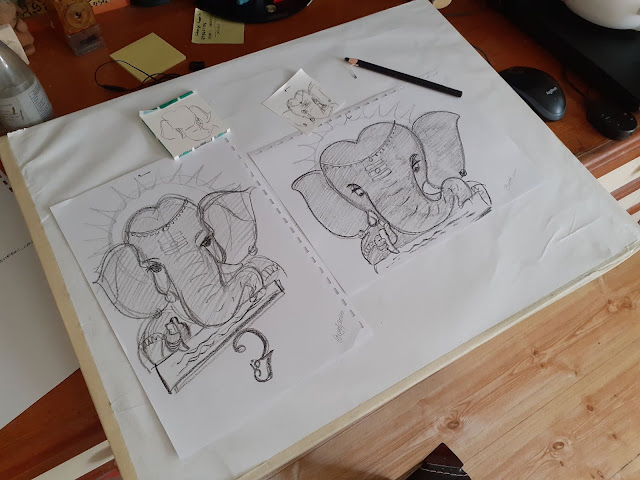 Posted by Senthilkumaran at 15:34 No comments:

1 May 2020, Labour Day holiday for some of us. Another working day for many. In the style of the old Communist Block posters. 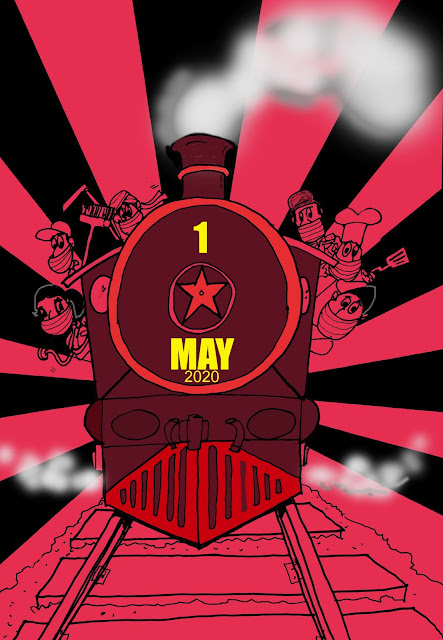 Posted by Senthilkumaran at 16:51 No comments: 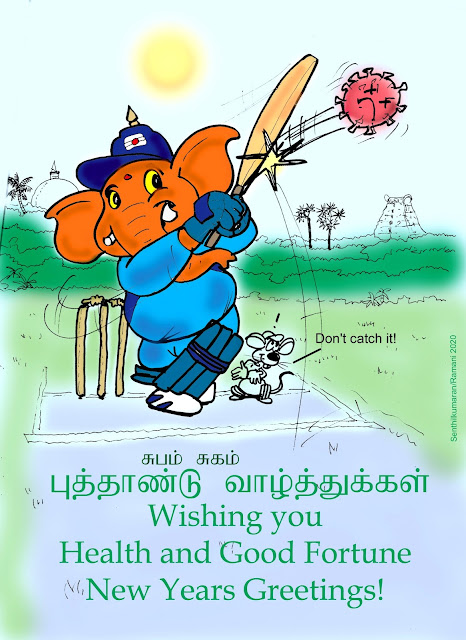 As we move into the new year over 13 and 14 April 2020, most of the world is locked down due to the COVID 19 corona virus infection.
So this year's card reflects that.
As I was doing this artwork, my wife saw it. Her comment was " ïf he is hitting the corona virus, who is going to catch it?" Hmm good point.
We don't want anyone to catch it. So I put that into the artwork and gave my wife a credit too.
Posted by Senthilkumaran at 11:45 3 comments:

Corona virus and our world 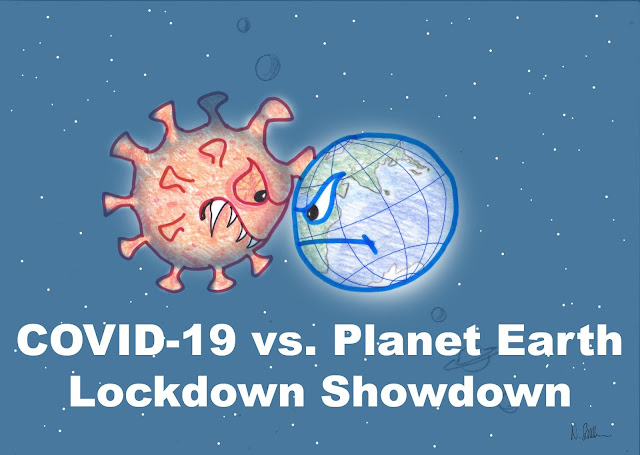 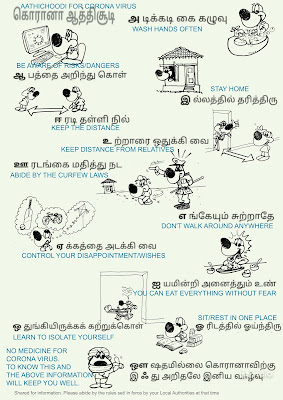 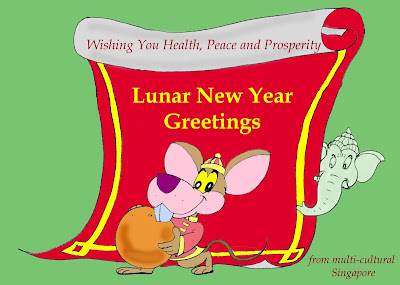 Links to some sites of interest

Senthilkumaran
Tampines, Singapore, Singapore
I'm a Sri Lankan born architect trained in UK living in Singapore. I became interested in drawings after seeing Walt Disneýs animated film "The Jungle Book" as a child. I started drawing cartoons after that and decided to become an architect as I realised that people would pay me to draw! In cartooning, my influences have been Walt Disney Studios, Warner Bros cartoons, Herge, Asterix the Gaul and Lat from Malaysia. I also draw cartoons on a commercial basis, so do get in touch with me if you wish.